Acme Township has been commissioning annual surveys for invasive phragmites stands along its Grand Traverse Bay shoreline since 2009.  The results of these surveys are used to determine the scope of each year's eradication program.  The first survey in 2009 was carried out by Derek Walton, a biologist and summer intern working for the township.  Specially trained township resident volunteers carried out the second survey in 2010.  The Watershed Center Grand Traverse Bay carried out the 2011 survey, and is expected to carry out the 2012 survey as well. 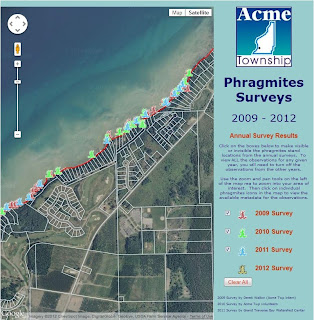 Each year, the survey recorded the location of each observed phragmites stand using a portable GPS (global positioning system) unit, together with any relevant metadata for the observation.  The data were then converted to GIS shapefile format to create phragmites location maps for use by the spraying contractor.

I used the three years of available survey data to make a simple interactive web map showing the location of each year's observed phragmites stands.  You can view the map with your browser at: http://www.nuspari.com/acme/acmefrag.html.

Hence the phragmites GIS data can serve a dual purpose.  When collected each summer, the data are used immediately for planning the season's eradication campaign.  When used together with other years' data, the data can serve as part of a monitoring and evaluation process, helping to formulate and evaluate key performance indicators for the long-term effort. 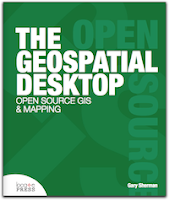 18 April 2012 update:  I left a question last week at Gary Sherman's blog, asking him about the status of his QGIS book project.  He graciously responded, indicating that the project is on hold at the moment.  The incredible pace of establishment of new features, functions, and plug-ins in the development version of QGIS (v. 1.9.90) guarantees that any QGIS book written now will be obsolete upon publication.  The strategy is to wait until version 2.0 comes out before deciding on whether and when to re-start the QGIS book project.
Posted by Howard at 10:44 PM No comments: